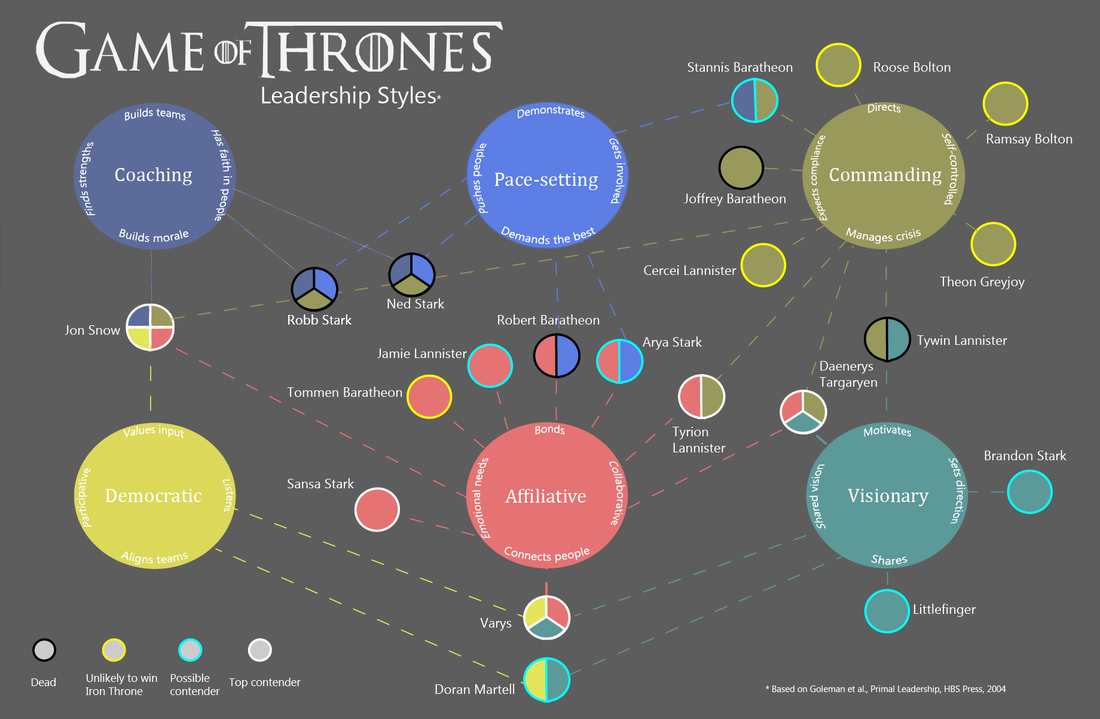 Coaches build teams, making use of their strengths and working on developing their weaknesses, such as when Ned Stark arranges for his daughter, Arya Stark, to have the swordplay lessons she requires.Top adopters of the coaching style: Ned Stark, Rob Stark, Jon Snow

Democratic leaders focus on getting and representing the views and opinions of others, such as when Jon Snow attempts to understand and protect the views of the perceived enemy–the Wildlings.Top adopters of the demographic style: Jon Snow, Doran Martell (see next season), Lord Varys (possible misdirection).

The pace-setter takes the bull by the horns and leads the way, showing his or her followers how to achieve their goals. The pace-setter is represented by more hands styles of leadership, such as when Ned Stark insists on personally delivering executions with his trusty sword.Top adopters of the pace-setter style: Ned Stark, Rob Stark, Jon Snow, Robert Baratheon (in his prime), Stannis Baratheon, Arya Stark

Affiliative leaders influence by building relationships. They are motivated to bring people together to achieve their goals, such as when Robert Baratheon reunites with Ned Stark to merge their families to align and secure both their futures.Top adopters of the affiliative style: Jamie Lannister, Robert Baratheon, Sansa Stark, Tyrion Lannister, Arya Stark, Daenarys Targaryen, Tommen Baratheon

In Westeros, all leaders need to adopt some level of command to control the chaos. Commanding leaders set directives and demand the compliance of their followers. When it’s not present, such as with Tommen Baratheon, other characters manipulate and take advantage. When it’s too excessive, such as with Joffrey Baratheon, other characters plot their downfall.Top adopters of the commanding style: Tywin Lannister, Tyrion Lannister (as Hand of the King), Cercei Lannister, Joffrey Baratheon, Stannis Baratheon, Daenarys Targaryen, Ned Stark, Robb Stark, Jon Snow, Roose Bolton, Ramsay Bolton, Theon Greyjoy

Visionary leaders align people by setting an inspiring goal for the future. Daenerys Targaryen aligns the people with the prospect of freedom from slavery. Brandon Stark drives support with his prophetic visions of the ‘black crow’.Top adopters of the commanding style:

My first job ended with a triumphant walk out. I threw my Safeway name badge on

Last year I blogged about the different leadership styles portrayed on Game of Thrones. Here’s an update

There is an endless struggle and debate that rages about what’s better: the book or the